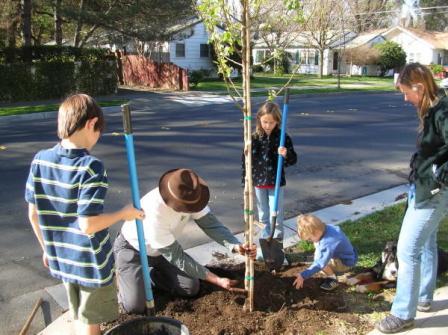 Local children help to plant a tree on Arbor Day.

During its 10 years of operation, the foundation has planted over 2,100 trees in this Tree City USA northwest of Sacramento. Wilkinson is a historian and says Woodland got its name because it grew out of an oak forest. Wilkinson and the foundation want to preserve that heritage.

The all-volunteer group works with the city to plant trees downtown and replace aging trees. Twenty years ago, there were almost no trees in the downtown area. In 1990, the city planted three or four blocks of trees. Since 2000, when the Woodland Tree Foundation was created, they have been adding trees.

Although the city and foundation work hand-in-hand today, the foundation actually grew out of a lawsuit against the city over a road widening project that was going to destroy a row of 100-year old olive trees. Wilkinson was on the city tree commission. He and a group of citizens sued the city to stop the removal.

They eventually settled out of court, and the city agreed to move the olive trees. Unfortunately, they were not cared for properly and they died.

“The silver lining is that the incident inspired me and a group of people to form a non-profit tree foundation,” said Wilkinson. “A year later we successfully procured our first grant from the California Department of Forestry.”

Because of budget cuts, the city is now encouraging the foundation to take on even more responsibility.

“In the past, the city did a lot of marking and service alerts for underground and utility lines,” said Wes Schroeder, city arborist. “That is very time consuming, and we’re helping the foundation phase that in.”

When old trees need to be replaced, the city grinds out the stumps and adds new soil. Then it gives the locations to the foundation to replace trees.

“We would probably do a lot fewer plantings without the foundation,” said Schroeder. 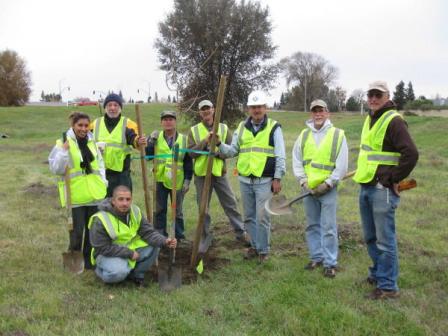 Volunteers proudly stand beside the 2,000th tree planted by WTF.

The foundation is also getting a lot of assistance from tree groups from two neighboring cities, Sacramento Tree Foundation and Tree Davis. In October and November, the two organizations got grants and chose to work with the Woodland Tree Foundation to plant trees in Woodland.

“Hopefully they’ll become team leaders in our towns when we do plantings,” said Keren Costanzo, new executive director of Tree Davis. “We’re trying to increase collaboration among the organizations and pool our resources.”

The Woodland Tree Foundation is also working with Tree Davis to plant trees along Highway 113 which joins the two cities.

“We’ve adopted seven miles along the highway,” said Wilkinson. “It was just completed 15 years ago and had very few trees.”

The foundation has been planting there for eight years, using mostly oaks and some redbuds and pistache.

“Tree Davis was planting on their end, and they taught us how to do it on our end, how to grow seedlings from acorns and buckhorn seeds,” said Wilkinson.

Early in 2011 the two groups will join to plant trees between the two towns.

“In the next five years, we’ll probably have trees all along the corridor. I think it will be pretty fabulous as years go by.”

Interestingly enough, the two cities first planned to join their towns with trees back in 1903, according to Wilkinson. A women’s civic club in Woodland, in response to Arbor Day, joined with a similar group in Davis to plant palm trees.

“Palm trees were the rage. The California tourism bureau wanted to create a tropical feel so easterners would be thrilled to come out to California.”

The project fizzled out, but the area still has palm trees that were planted in that era. 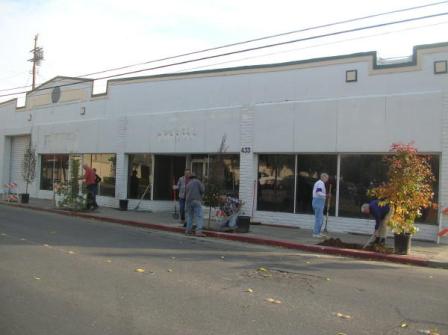 The Woodland Tree Foundation has received grants from California ReLeaf, the California Department of Forestry and Fire Protection and PG&E (the latter to make sure the proper trees are grown under power lines). The foundation has a list of 40 or 50 volunteers who help with three or four plantings a year, mostly in the fall and on Arbor Day. Students from UC Davis and boys and girl scouts have helped.

Recently a woman in town who has a family charitable trust contacted the foundation. She was impressed by the foundation’s track record and volunteer spirit.

“She is interested in making Woodland a more walkable, shady city,” said Wilkinson. “She has offered us a major gift to pay for a three-year strategic plan and funds to hire our first ever paid part-time coordinator. This will enable Woodland Tree Foundation to reach deeper into the community.”

“A lot of us feel what we’re doing is special. Trees need care, and we’re leaving them better for the next generation.” 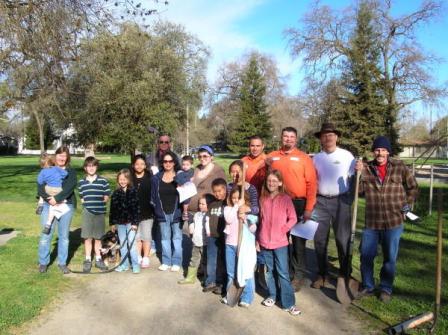 : Downtown & other in-fill street plantings and waterings, an Arbor Day event, and plantings along Highway 113