Handicapping a key harbinger of spring 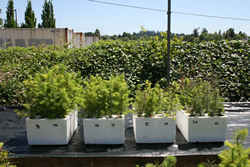 Scientists at the US Forest Service’s Pacific Northwest Research Station Portland, Oregon, have developed a model to predict bud burst. They used Douglas firs in their experiments but also surveyed research on about 100 other species, so they expect to be able to adjust the model for other plants and trees.

Both cold and warm temperatures affect the timing, and different combinations yield different outcomes — not always intuitive. With plenty of hours of cold temperatures, trees need fewer warm hours to burst. So earlier spring warmth will drive bud burst earlier. If a tree isn’t exposed to enough cold, though, it needs more warmth to burst. So under the most dramatic climate change scenarios, warmer winters could actually mean a later bud burst.

Genes play a roll, too. The researchers experimented with Douglas firs from across Oregon, Washington, and California. Trees from colder or drier environments showed earlier burst. Trees descended from those lines could fare better in places where their warmer-and-wetter-adapted cousins live now.

The team, led by research forester Connie Harrington, hopes to use the model to predict how trees will respond under various climate projections. With that information, land managers can decide where and what to plant, and, if necessary, plan assisted migration strategies.