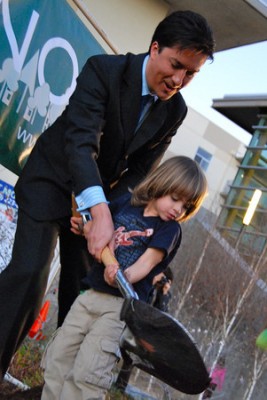 Dozens of families, numerous former mayors of Palo Alto, and Canopy volunteers made up a crowd of about 100 people at Canopy’s annual awards ceremony. This year’s ceremony was held on Tu Bishvat, the Jewish holiday for trees, adding a special significance for many of the attendees.

Palo Alto Mayor Sid Espinosa planted a Cedar of Lebanon at the Oshman Family Jewish Community Center with the help of several children in attendance at the ceremony.

In praise of Canopy, Mayor Espinosa said, “Canopy makes sure that hundreds [of trees] are planted -hundreds more than were cut down – all over this city.”