When Kemba Shakur first left her job as a corrections officer at Soledad State Prison 15 years ago and moved to Oakland she saw what many newcomers and visitors to the urban community see: a barren cityscape devoid of both trees and opportunities.

But Shakur also saw something else – possibilities. 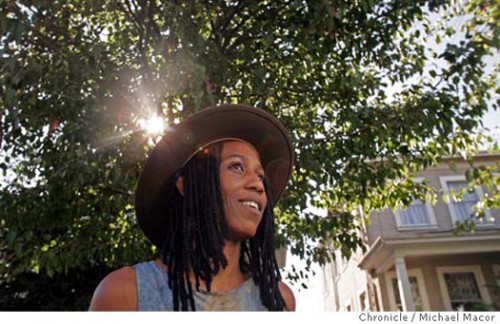 “I love Oakland. It has a lot of potential and most people who live here feel that way,” Shakur says.

In 1999, Shakur founded Oakland Releaf, an organization dedicated to providing job training for at-risk youth and hard-to-employ adults by improving the urban forest of Oakland. In 2005, the group joined with nearby Richmond Releaf to form Urban Releaf.

The need for such an organization was great, particularly in the “flatlands” of Oakland, where Shakur’s organization is based. An urban area criss-crossed with freeways and home to many industrial sites, including the Port of Oakland, West Oakland’s air quality is impacted by the many diesel trucks traveling through the area. The area is an urban heat island, regularly registering several degrees higher than its tree-filled neighbor, Berkeley. The need for a job-training organization was also significant. Unemployment rates in both in Oakland and Richmond are high and violent crime is consistently two or three times the national average.

Urban Releaf’s big kick off came in the spring of 1999 during the “Great Green Sweep,” a challenge between then-Mayors Jerry Brown of Oakland and Willie Brown of San Francisco. Billed as “Brown vs. Brown,” the event called on each city to organize volunteers to see who could plant the most trees in one day. The rivalry between the quirky former governor Jerry and the flamboyant and outspoken Willie turned out to be a big draw.

“I was shocked at the level of anticipation and excitement it brought,” Shakur recalls. “We had about 300 volunteers and we planted 100 trees in two or three hours. It went so fast. I looked around after that and I said wow, that’s not enough trees. We’re going to need more.”

Oakland emerged victorious from the competition and Shakur was convinced that more could be done.

With donations and state and federal grants, Urban Releaf now plants about 600 trees a year and has trained thousands of young people. The skills the kids learn include far more than planting and caring for the trees. In 2004, Urban Releaf teamed with UC Davis on a CalFed-funded research project designed to study the effects of trees on reducing soil contaminants, preventing erosion and improving water and air quality. The study called on the Urban Releaf youth to collect GIS data, take runoff measurements and conduct statistical analysis — skills that readily translate to the job market.

Providing young people in her neighborhood with experience that makes them more employable has become increasingly important, Shakur says. In recent months, West Oakland has been shaken by the deaths of several young men due to violence, some of whom Shakur knew personally and had worked with Urban Releaf.

Shakur hopes to one day open a “sustainability center,” that would serve as a central location for providing green jobs for young people in Oakland, Richmond and the greater Bay Area. Shakur believes more job opportunities for young people could stem the tide of violence.

“Right now there’s really an emphasis on the green jobs market and I’m enjoying it, because it is putting an emphasis on providing jobs for the underserved,” she says.

Shakur, a mother of five, speaks with passion about the young people who come to the organization from the tough neighborhoods of Oakland and Richmond. Her voice fills with pride as she points out that she first met Rukeya Harris, the college student who answers the phone at Urban Releaf, eight years ago. Harris saw a group from Urban Releaf planting a tree near her house in West Oakland and asked if she could join the work program. She was only 12 at the time, too young to join, but she continued to ask and at 15 she enrolled. Now a sophomore at Clark Atlanta University, Harris continues to work for Urban Releaf when she comes home from school.

Urban Releaf has managed to thrive despite tough economic times because of support from state and federal agencies as well as private donations, Shakur says. For example, in April, members of the Golden State Warriors basketball team and employees and executives of Esurance joined Urban Releaf volunteers for “Plant a Tree Day,” sponsored by Esurance, an online insurance agency. Twenty trees were planted at the intersection of Martin Luther King Jr. Way and West MacArthur Boulevard in Oakland.

“This is an area that’s really been devastated by foreclosures,” says Noe Noyola, one of the volunteers at “Plant a Tree Day.” “It’s stark. There’s a lot of concrete. Adding 20 trees really made a difference.” 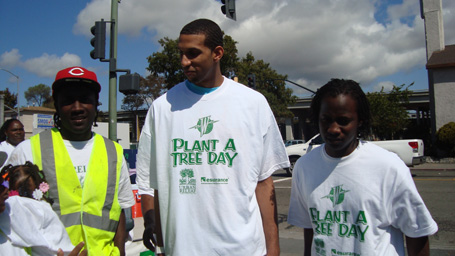 Noyola first connected with Urban Releaf while seeking a grant from the local redevelopment agency to improve the landscaping on a median in his neighborhood. Like Shakur, Noyola felt that replacing the scraggly plants and concrete in the median with well-planned trees, flowers and shrubbery would improve the scenery and the feeling of community in the neighborhood. Local officials, who could not immediately respond to the project, urged him to work with Urban Releaf and from that partnership the 20 trees were planted.

The first step, Noyola says, was convincing some hesitant local residents and business owners that promises of improving the neighborhood would be met. Oftentimes, he says, organizations from both inside and outside of the community are all talk, with no follow through. Permission from the landowners was necessary because sidewalks had to be cut in order to plant the trees.

The entire project, he says, took only about a month and a half, but the psychological impact was instantaneous and profound.

“It had a strong effect,” he says. “Trees are really a tool for reshaping the vision of an area. When you see trees and a lot of greenery, the impact is immediate.”

Besides being beautiful, the tree plantings have inspired residents and business owners to do more, Noyola says. He notes that the difference made by the project has inspired a similar planting on the next block over. Some residents have even planned “guerrilla gardening” events, unauthorized volunteer plantings of trees and greenery at abandoned or blighted areas.

For both Noyola and Shakur, the greatest satisfaction in their work has come from what they describe as creating a movement — seeing others motivated to plant more trees and overcome what they at first saw as limits to their environment.

“When I first started this 12 years ago, people looked at me like I was crazy and now they appreciate me,” Shakur says. “They said, hey, we have issues of prison and food and unemployment and you’re talking about trees. But now they get it!”

Crystal Ross O’Hara is a freelance journalist based in Davis, California.