A small but dedicated group in Atwater called the Tree Partners Foundation is changing the landscape and changing lives. Founded and headed by the enthusiastic Dr. Jim Williamson, the fledgling organization has already formed partnerships with the Merced Irrigation District, Pacific Gas & Electric Company, the National Arbor Day Foundation, Merced College, local school districts and city governments, the California Department of Forestry and Fire Protection, and the Federal Penitentiary at Atwater.

Williamson, who co-founded the Tree Partners Foundation with his wife Barbara in 2004, says the organization grew out of his decades-long practice of giving away trees. The Williamsons value trees for many reasons: the way they connect people to nature; their contribution to clean air and water; and their ability to reduce noise, lower utility bills, and provide shade. 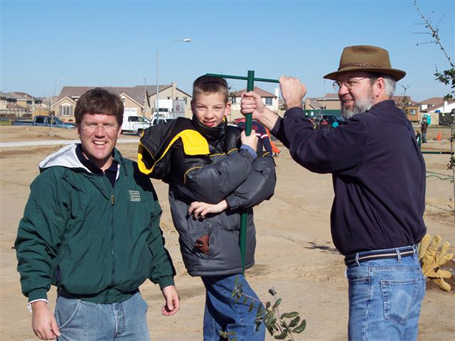 Tree planting, maintenance, and tree education round out the foundation's services and involve both youth and adults.

“My wife and I were sitting around thinking, we’re not going to live forever, so we’d better start a foundation if we want this to continue,” Williamson says. The Tree Partners Foundation is made up of just seven board members, but they are influential members of the community, including Dr. Williamson, Atwater’s mayor, a retired college professor, the director of maintenance for the Atwater Elementary School District, and the city’s urban forester.

Despite its size, the foundation has already established a variety of programs and has many more in the works. Williamson and others credit the group’s success to a strong board of directors and the formation of so many important partnerships. “We’ve been very fortunate,” Williamson says. “If I need something it always seems to be there.”

The Tree Partners Foundation has made partnering with government agencies a primary goal. The group provides input on city tree policies, partners with local agencies on grant applications, and urges local governments to place an emphasis on caring for the urban forest.

One accomplishment the foundation is particularly proud of is its success in convincing the City of Atwater to create an urban forester position. “In these [difficult] economic times I was able to show them that it was to their economic advantage to make trees a priority,” Williamson says.

One of the most important partnerships the foundation has formed is with the Federal Penitentiary at Atwater. Several years ago Williamson, who as a child helped his grandfather with their family’s small arboretum, connected with the former warden of the penitentiary, Paul Schultz, who as a child had helped his own grandfather in his work as the landscaper at Princeton University. The two men dreamed of creating a small nursery at the penitentiary that would provide vocational training to the inmates and trees to the community.

The Tree Partners Foundation now has a 26-acre nursery at the site, with room to expand. It is manned by volunteers from the penitentiary’s minimum security facility who gain valuable training to prepare them for life outside the prison’s walls. For Williamson, who together with his wife is a counselor in private practice, providing an opportunity for the inmates to learn nursery skills is particularly rewarding. “It’s just a wonderful partnership,” he says of the relationship formed with the penitentiary.

Bigger plans for the nursery are underway. The foundation is working with Merced College to offer satellite classes to the inmates that will provide a certifiable vocational program. The inmates will study topics such as plant identification, tree biology, tree and soil relations, water management, tree nutrition and fertilization, tree selection, pruning, and diagnosis of plant disorders.

The nursery also provides trees suitable for planting under power lines to PG&E for use as replacement trees. And the nursery grows trees for the Merced Irrigation District’s annual customer tree give-away. This year the foundation expects to supply 1,000 15-gallon trees for the irrigation district’s give-away program. “It’s a big cost savings to them, plus it provides funding for our organization,” says Atwater’s Urban Forester and Tree Partners Foundation Board Member Bryan Tassey, whose many jobs include overseeing the nursery.

Tassey, who also teaches at Merced College, says he’s amazed at how much the nursery and the program have evolved in such a short time. “A year ago it was bare ground,” he says. “We’ve come quite a ways.”

Much of the Tree Partners’ accomplishments can be attributed to successful grant writing.

For example, the foundation received a $50,000 USDA Forest Service grant. The generosity of local organizations—including a $17,500 donation from the Atwater Rotary Club and in-kind donations from local businesses—have also bolstered the Tree Partners’ success.

Williamson says the organization is not interested in competing with local nurseries, but rather in earning enough money to continue its work in the community. “My goal in my lifetime is to make the nursery sustainable and I believe we will,” he says.

Organizations and businesses shipping trees from outside California face strict agricultural requirements. The result is that when California residents join NADF, they receive bare-root trees (6- to 12-inch trees with no soil around the roots) shipped from Nebraska or Tennessee.

The Tree Partners Foundation is in negotiations to become the supplier for NADF’s California members. The Tree Partners would provide tree plugs—live plants with soil at the root ball—which the foundation believes would mean healthier, fresher trees for NADF’s members.

At first, Tassey says, the Tree Partners would need to contract out to local nurseries for many of the trees. But he says he sees no reason why the foundation’s nursery couldn’t one day supply all of the trees to NADF’s California members. According to Tassey, the National Arbor Day Foundation’s spring and fall shipments currently provide about 30,000 trees annually to California. “The potential in California is huge, which the Arbor Day Foundation is very excited about,” he says. “That’s scratching the surface. We’re anticipating possibly a million trees in five years.”

That, says Tassey and Williamson, would be one more step toward financial stability for the organization and a healthier urban forest for Atwater and beyond. “We’re not rich, but we’re well on our way to becoming sustainable,” says Williamson.