What began 13 years ago as a class project has become a thriving tree organization in the city of Orange. In 1994, Dan Slater—who later that year was elected to the Orange city council—took part in a leadership class. For his class project he chose to focus on improving the condition of the city’s declining street trees.

“At the time, the economy was bad and the city didn’t have any money to plant trees that had died and needed to be replaced,” Slater recalls. Others joined Slater and the group, Orange for Trees, began to seek out funding and gather volunteers.

“Our focus was on residential streets that had few or no trees and we tried to get as many residents on board as possible to help plant and water them,” he says. 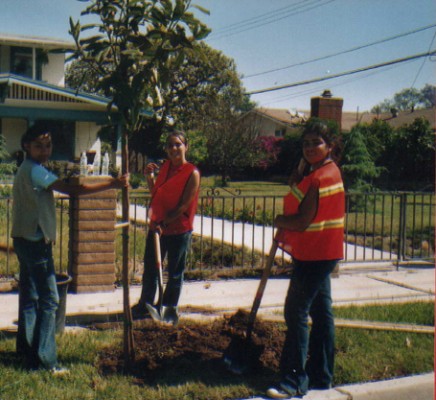 It wasn’t long after Slater took office that the Orange City Council was faced with an issue that would highlight the deep emotional ties people have to trees. Located about 30 miles southeast of Los

Angeles, Orange is one of a handful of cities in Southern California built around a plaza. The plaza serves as a focal point for the city’s unique historical district and is a great source of pride for the community.

In 1994 funds became available to upgrade the plaza. Developers wanted to remove the 16 existing Canary Island pines and replace them with Queen Palms, a Southern California icon. “The pine trees were healthy and very picturesque and very tall,” says Bea Herbst, a founding member of Orange for Trees and the current vice president of the organization. “One of the things about these pines is that they put up with very nasty soil. They are tough trees.”

But the developers were adamant. They were concerned that the pines would interfere with their plans to include outdoor dining at the plaza. The issue ended up before the city council. As Herbst recalls, “there were more than 300 people at the meeting and about 90 percent of them were pro-pine.”

Slater, who is still active in Orange for Trees, said he initially supported the idea of Queen Palms in the plaza, but was eventually swayed by Herbst and others. “I think it was the only time on the city council that I changed my vote,” he says. The pines remained, and in the end, Slater says he’s glad he changed his mind. In addition to providing beauty and shade for the plaza, the trees have been a financial boon to the city.

With its historical buildings and homes, the attractive plaza and its proximity to Hollywood, Orange has served as the filming location for several television shows and movies, including That Thing You Do with Tom Hanks and Crimson Tide with Denzel Washington and Gene Hackman. “It has a very small town flavor to it and because of the pines you don’t necessarily think Southern California,” Herbst says.

The fight to save the plaza pines helped to galvanize support for preserving city trees and for Orange for Trees, Herbst and Slater say. The organization, which officially became a nonprofit in October 1995, now has about two dozen members and a five-member board.

Orange for Trees’ mission is to “plant, protect and preserve the trees of Orange, both public and private.” The group gathers volunteers for plantings from October to May. It averages about seven plantings per season, Herbst says. She estimates that in all Orange for Trees has planted about 1,200 trees in the past 13 years.

Orange for Trees also works with homeowners to educate them about the importance of trees and how to care for them. Herbst spent two years studying horticulture in junior college and will go out to homes to offer residents tree advice free of charge. The group also lobbies the city on behalf of residents for tree preservation and planting. 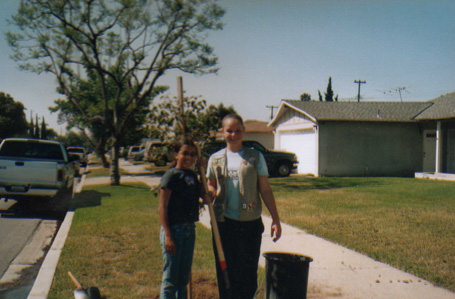 Slater says having support from the city and its residents is the key to the organization’s accomplishments. “Part of the success comes from the buy-in from the residents,” he says. “We don’t plant trees where people don’t want them and won’t take care of them.”

Slater says plans for the future of Orange for Trees include improving the work the organization is already doing. “I’d like to see us become better at what we’re doing, grow our membership, and increase our funding and our effectiveness,” he says. And that’s sure to be good news for the trees of Orange.