The Greater Modesto Tree Foundation owes its origins to a French photographer who came to town in 1999 wanting to photograph the largest and most unique trees. He had a contract with Fuji Film and had heard about Modesto’s fame as a Tree City.

Chuck Gilstrap, who became the foundation’s first president, recalls the story. Gilstrap, then the city’s superintendent of urban forestry, and Peter Cowles, director of public works, took the photographer around to shoot trees.

Later when Gilstrap was helping the photographer get ready to leave town, the photographer said in very broken English, “How can we plant a tree for every baby born in the world for the year 2000?”

Parents and grandparents loved the idea. A year later, thanks to a federal Millennium Green grant and hundreds of volunteers, the fledgling group had planted 2,000 trees (because it was the year 2000) along a mile-and-a-half stretch of Dry Creek Regional Park Riparian Basin, a tributary of the Tuolomne River that runs through the southern part of town.

The organization applied for non-profit status soon after and continued its “Trees for Tots” program. Trees for Tots continues to be the largest tree planting program organized by the foundation, with more than 4,600 Valley Oaks planted to date. The funding comes from California ReLeaf grants.

In the 10 years of its existence, the Greater Modesto Tree Foundation has planted over 6,000 trees, according to current president Kerry Elms (perhaps an appropriate name).

“We are an all-volunteer group and, except for an insurance policy and the cost of maintaining our web site, all donations and membership fees are used to provide trees for our various programs,” he said. “All work related to our projects is performed by our members and community volunteers. We have a large number of groups (Boy and Girl Scouts, schools, churches, civic groups and many other volunteers) that assist with planting and other efforts. Our volunteers have totaled over 2,000 since we began.”

Elms said they never have trouble getting volunteers. Youth groups are especially encouraged to get involved. The City of Modesto is a strong partner in many of the foundation’s planting projects.

The foundation plants nearly 40 trees five times a year as part of the Stanislaus Shade Tree Partnership, which plants shade trees in low income neighborhoods. From its beginning, the organization has created wonderful partnerships, and this project is done in conjunction with the Modesto Irrigation District (MID), the Sheriff’s Department, Police Department, City Urban Forestry Division and many volunteers.

The foundation sends out its arborist a week before the planting to make sure the tree size and site are appropriate (not on the north side or too close to the homes). MID buys the trees And the Sheriff’s Department delivers them. Each home can receive up to five trees.

“The reason MID is supporting this effort is that if the trees are planted appropriately, they will shade the home, causing a 30 percent energy savings with less air conditioning needed in the hot summer months,” said Ken Hanigan, public benefits coordinator for MID. “We have found that the homeowner needs to have an invested interest and then the family will have more of a tendency to maintain the trees. Therefore, the family is required to dig the holes.

“It is a feat of love and community effort that is just amazing,” Hanigan said.

The foundation makes it possible for memorial or living testimonial trees to be planted in honor of friends or family. The foundation provides the tree and a certificate and helps the donor to select the variety and location of the tree. The donors provide the funding. 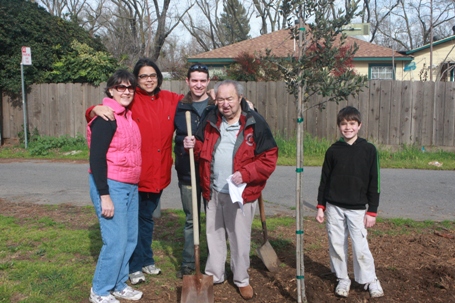 These dedications are heart warming for the donors, and they can have interesting backgrounds. Elms recounted a recent planting on a golf course. A group of men had played golf for many years on the course and when one of the members died, the others decided to honor him by replacing a tree that had fallen on the course after the flood of 1998. The spot they chose was right on the turn of a fairway that had always been in the way of the golfers. When the tree is grown, many other golfers will be challenged by that tree.

In an effort to grow their own trees, the foundation has collaborated with the Sheriff’s Department Honor Farm, which trains low-risk offenders to plant and care for seedlings until they are large enough to plant.

Modesto has been a Tree City for 30 years, and the community takes pride in its urban forest. But, as in all California cities, Modesto has been under severe financial stress for the last several years and no longer has the staff or funding for some of its park and tree maintenance.

The Greater Modesto Tree Foundation and its many volunteers try to fill the gap where they can.

Donna Orozco is a freelance writer based in Visalia, California.