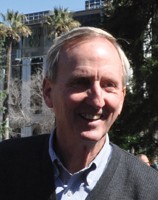 The Sacramento Tree Foundation was one of the original ten founding network groups when Isabel Wade started the alliance through Trust for Public Lands (TPL).

I served on the original Advisory Committee after the group was aligned with TPL – which lead the intense strategic planning session and formed the path for California ReLeaf.

California ReLeaf resonates solidarity for the ReLeaf Network groups. It provides legitimacy and voice for local nonprofits! It is a beneficial way for groups to learn about different leadership styles and how to position a nonprofit due to the large diversity of large and small organizations.

California ReLeaf has a dual role: networking and learning. It is the ‘go to’ for new nonprofits – the incubator that hatches and nurtures small groups.

One of the best moments for California ReLeaf was when we commenced the alliance with Urban Forestry scientists so that we could begin showing the value and benefits of trees scientifically. This really gave California ReLeaf a pedestal to stand on.

The essence of growing urban forests is in the hands of the folks residing in our cities and communities. California is an urbanized state (over 90%), most of which is controlled by property owners. California ReLeaf targets ‘people’ and property owners are the people they strive to reach. There is still a lot of ground to plant (plow).