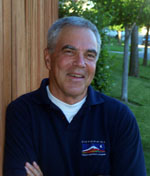 What is/was your relationship to ReLeaf?
At the time California ReLeaf was formed in 1989, I was the State’s Urban Forester working as Urban Forestry Program Manager for the California Department of Forestry (CAL FIRE). I worked at CAL FIRE until 2000. Then, I became the Director of Communication for the Center of Urban Forest Research until 2008.