A Network of Compadres 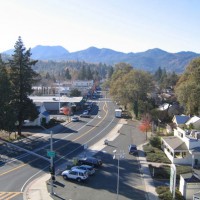 Retired, worked most recently as a Gang Prevention Specialist

Initially, Jane Bender and I met in a volunteer group called Beyond War in Sonoma County that worked toward peace and conflict resolution. After the Berlin Wall fell, Beyond War shut down and Jane and I became aware of the growing concern about global warming.

We learned that trees were a tool to reach people and they helped with healing, taught commitment, and improved communities. This led us to working with Friends of the Urban Forest and eventually we created Sonoma County ReLeaf (in 1987)– an all-volunteer organization. One of our first public events was to invite Peter Glick to come to talk to a Sonoma County audience of over 200 about global warming – this was around 1989.

The first big project of Sonoma County ReLeaf was in 1990 called the Plant The Trail project. In a one-day event, we organized a tree planting with 600 trees, 500 volunteers, and 300 miles of irrigation. This award-winning project put Sonoma County ReLeaf in the spotlight and got the attention of newly-formed California ReLeaf and PG&E. The utility company eventually contracted with us to run a shade tree program throughout Northern California which we did for more than six years.

Then Sonoma County ReLeaf became a part of the ReLeaf network. In fact, we were part of a California ReLeaf incentive program where we paid $500 to be part of California ReLeaf. Then after we had a mission statement, articles of incorporation, board of directors, and were incorporated, we got the $500 back. I was nervous and excited to be one of the first members of the California ReLeaf advisory council, even though I knew so little about trees. Sonoma County ReLeaf was a Network member until it closed it doors in 2000.

California ReLeaf offered validation. We were in a Network of compadres, people with the same spirits, people who thought the same way. We were grateful for other people who knew so much who were willing share with us. As people who fearlessly step into things, we appreciated how much other groups were able to teach us; folks like Fred Anderson, Andy Lipkis, Ray Tretheway, Clifford Jannoff and Bruce Hagen.

At one point I was asked to give a talk on funding at a Network meeting. I remember standing up in front of the group and explaining there are two ways to look at funding sources. We can be in competition with each other or we can see each other as partners. I looked at the crowd and everyone’s head was nodding. Wow, everyone was in agreement – we truly are all partners here. If we all work together, the funding thing will all work out.

Also, we organized a street planting in a small town of Middletown with a California ReLeaf tree-planting grant. On the morning of event the entire town showed up to help plant. A little girl played the Star Spangled Banner on her violin to open up the event. Folks brought refreshments. The fire department watered the trees. If I ever have the chance to drive through Middletown and see those grown trees, I remember that remarkable morning.

I think about that talk by Peter Glick about global warming. Even back then, he predicted what was going to happen to our planet. It’s all really happening. It is critical because through a group like California ReLeaf, people are reminded about the value of trees and how they mend the earth. Sure there are times when public money is tight but we need to remember that trees are a long-term resource. ReLeaf reminds the public, through its network groups and it’s presence in Sacramento, about the long-term, scientifically-proven benefits of trees. They are able to reach people outside of the urban forestry spectrum. It’s strange, when you ask people what is important for them in their community they will mention parks, green space, clean water, but those are always the first things that get cut from a budget.

I believe that ReLeaf helps us find solutions that create positive changes in the state of California – changes that can only happen when a thoughtful group of people work together and are persistent and able to be heard.