You would have to live under a rock to not know that President Obama presented his State of the Union address to Congress and the country last night. During his speech, he talked about climate change, its effects on our country, and urged us to take action. He said:

“For the sake of our children and our future, we must do more to combat climate change. Yes, it’s true that no single event makes a trend. But the fact is, the 12 hottest years on record have all come in the last 15. Heat waves, droughts, wildfires, and floods — all are now more frequent and intense. We can choose to believe that Superstorm Sandy, and the most severe drought in decades, and the worst wildfires some states have ever seen were all just a freak coincidence. Or we can choose to believe in the overwhelming judgment of science — and act before it’s too late.”

Maybe you’re reading this and wondering, “What does climate change have to do with trees?” Our answer: a lot.

“If Congress won’t act soon to protect future generations, I will. I will direct my Cabinet to come up with executive actions we can take, now and in the future, to reduce pollution, prepare our communities for the consequences of climate change, and speed the transition to more sustainable sources of energy.” 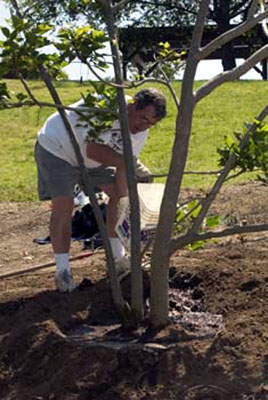 As action is taken, we hope that urban forests are looked to as a part of the solution. Our trees, parks, and open spaces all act as part of our cities’ infrastructures by cleaning and storing floodwater, reducing energy usage by cooling our homes and streets, and don’t forget, cleaning the air we breath.

For more information about urban forests, how they fit into the climate change conversation, and the amazing number of other benefits they provide, download this information sheet. Print it out and share it with the people in your life who care about our environment.

Plant trees to make a difference now and for years to come. We can help you do that.

Ashley is the Network and Communication Manager at California ReLeaf.