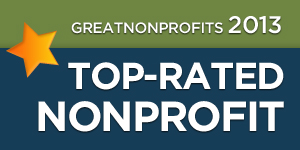 New GreatNonprofits.org Award is Based on Positive Online Reviews

Sacramento, California, November 1, 2013 – California ReLeaf announced today that it has been honored with a prestigious 2013 Top-Rated Award by GreatNonprofits, the leading provider of user reviews about nonprofit organizations.

“We are excited to be named a Top-Rated 2013 Nonprofit,” says Joe Liszewski, Executive Director of California ReLeaf.  We are proud of our accomplishments this year, including working with over 80 local nonprofit and community groups as part of the California ReLeaf Network and planting and caring for 2,000 trees in communities throughout the state.

The Top-Rated Nonprofit award was based on the large number of positive reviews that California ReLeaf received – reviews written by volunteers, donors and local partners. People posted their personal experience with the nonprofit.  For example, one person wrote, “California Releaf is the statewide advocate for both urban forestry and the nonprofits making it happen at the neighborhood level”

“Savvy donors want to see the impact of their donations more than ever,” said Perla Ni, CEO of GreatNonprofits, “People with direct experience with California ReLeaf have voted that the organization is making a real difference.”

Being on the Top-Rated list gives donors and volunteers more confidence that this is a credible organization.  The reviews by volunteers, clients and other donors show the on-the-ground results of this nonprofit.  This award is a form of recognition by the community.

California ReLeaf works statewide to promote alliances among community-based groups, individuals, industry, and government agencies, encouraging each to contribute to the livability of our cities and the protection of our environment by planting and caring for trees. www.californiareleaf.org

GreatNonprofits is the leading site for donors and volunteers to find reviews and ratings of nonprofits. Reviews on the site influence 30 million donation decisions a year. www.greatnonprofits.org