From our Spring/Summer 2015 California Trees newsletter: 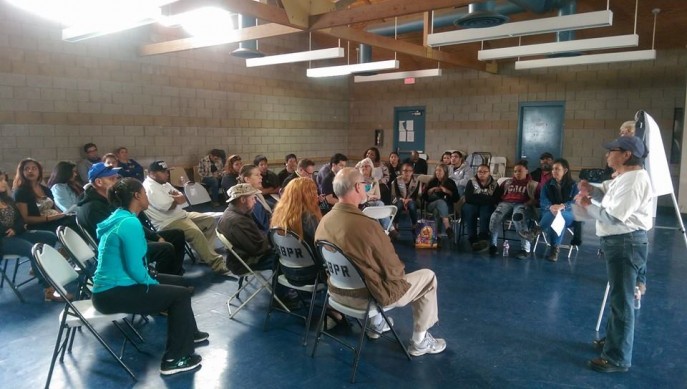 The Incredible Edible Community Garden has a great turnout at a February 2015 community engagement meeting.

Leaves come in a myriad of shapes and shades, but those tasked with protecting and preserving them don’t reflect the same diversity, according to a recent study.

“The State of Diversity in Environmental Organizations: Mainstream NGOs, Foundations, Government Agencies” conducted by Dorceta E. Taylor, Ph. D. of the University of Michigan’s School of Natural Resources & Environment (SNRE) was released in July 2014. It found that while some strides have been made in the past 50 years, most leadership roles in these organizations are still held by white males.

Dr. Taylor studied 191 conservation and preservation organizations, 74 government environmental agencies, and 28 environmental grant making foundations. Her report also includes information gleaned from confidential interviews with 21 environmental professionals who were asked about the state of diversity in their institutions.

According to the report, the largest gains have been seen by white women. The study found that women occupied more than half of the 1,714 leadership positions studied in conservation and preservation organizations. Women also represent more than 60% of the new hires and interns in those organizations.

The report also confirmed the existence of a “green ceiling,” finding that only 12-16% of environmental organizations studied included minorities on their boards or general staff. Additionally, findings show that these employees are concentrated in the lower ranks.

Ryan Allen, an Environmental Services Manager for the Koreatown Youth and Community Center (KYCC) in Los Angeles, says it’s no surprise that few people of color are represented in most mainstream agencies and organizations.

“Given the challenges minorities have faced in America, it’s understandable that the environment hasn’t been viewed as an urgent cause to take a stand on,” Allen said.

Edgar Dymally – a Board Member of the non-profit TreePeople – agrees. He says many minorities’ focus has been on gaining equal access to social justice and overcoming housing and employment discrimination rather than environmental equity.

Dr. Taylor maintains that increased diversity would mean increased focus on issues and concerns facing people of color and other underrepresented groups.

“You need to have everyone’s voice at the table, so you can fully understand the needs each community has,” Allen concurred.

“Many environmental groups put a lot of effort into working in low income and minority communities, because that is typically where the largest environmental needs are,” Allen continued. “I think the disconnect comes in not fully understanding how to communicate the work you are doing with the population you are trying to serve. KYCC plants a lot of trees in South Los Angeles, a largely Hispanic and African-American, low income community. We talk about the benefits of clean air, stormwater capture and energy savings, but maybe the thing people really care about is how the trees will help lower asthma rates.”

What’s being done by smaller groups, experts maintain, could be replicated by larger organizations for an even greater impact.

“I think the disconnect comes in not fully understanding how to communicate the work you are doing with the population you are trying to serve.”

“KYCC works with a lot of recently immigrated families, and with that comes a lot of barriers in language and not understanding a new culture. Because of this we hire staff that can speak the language of the clients we serve – who understand the culture they are coming from. This allows us to keep our programming relevant to the communities we serve, and also keeps us connected.

“By letting the community tell us what they need, and then helping them to meet that need, we know the programs we run are making a positive impact on our clients,” Allen said.

His thoughts are shared by Mary E. Petit, Founder and Co-Executive director of The Incredible Edible Community Garden (IECG), also based in Southern California.

“Diversity is a critical component to ensure the strength and longevity of not only environmental organizations but all organizations,” Petit said.

“It ensures we evaluate our programs through a wide lens. It keeps us honest. If we look at nature, the healthiest and most balanced, robust natural environments are those that are most diverse.

“But in order to embrace diversity and the strength that it can give an organization, people must be open and unbiased, not just in words but in how people live their lives,” she continued.

Eleanor Torres, Co-Executive Director of Incredible Edible Community Garden says she left the environmental arena in 2003 after becoming disillusioned. She returned in 2013 and while she was happy to see some “new blood” in the movement, she says there’s still work to be done.

“It hasn’t changed much. There has to be a huge shift in understanding,” she continued. “In urban forestry, you’re going to have to deal with people of color.”

Torres, who is Latina and Native American, entered the field in 1993 and has had her share of being the “first” or “only” person of color in a leadership position. She says issues of racism, sexism and classism still need to be addressed before real change can be accomplished.

A TreePeople board meeting hosts representatives from a range of communities.

Dymally has been a member of TreePeople’s Board for eight years. A civil engineer, his day job is as a Senior Environmental Specialist for the Metropolitan Water District of Southern California (MWD). He says he’s only come across a few people of color in higher leadership roles.

Dymally joined TreePeople at the request of the Board’s only other member of color, who is Hispanic. He was urged to become more active and involved, largely because there weren’t many people of color represented. That “each one, reach one” mentality, Dymally said, is encouraged by the organization’s Founder and President Andy Lipkis, who is white.

“They can set the tone and bring energy to this struggle.”

LIVING – AND LEAVING – A LEGACY

Dymally is the nephew of the former California Lt. Gov. Mervyn Dymally, the first and only Black person to serve in that capacity. The younger Dymally points to his late uncle’s past success in getting minorities represented on statewide Water Boards.

“I would certainly like to see the President, or someone of his profile, maybe the First Lady, get behind this effort,” Dymally shared.

First Lady Michelle Obama, he added, has been a champion for nutrition and garden creation and can do the same for promoting the need for bringing different people and viewpoints to the proverbial environmental table.

The “State of Diversity in Environmental Organizations” report argues that the issue requires “priority attention” and makes recommendations for “aggressive efforts” in three areas– tracking and transparency, accountability, and resources.

“Diversity statements without a plan and rigorous data collection are just words on paper,” reads the 187-page document.

“Organizations and associations should institute annual diversity and inclusion assessments. Disclosure should facilitate sharing of strategies for addressing unconscious bias and overhauling recruiting beyond the green insiders’ club,” it continues.

The report also suggests that foundations, NGOs and government agencies integrate diversity goals into performance evaluations and grant making criteria, that increased resources be allocated for diversity initiatives to work, and that sustainable funding be provided for networking to reduce isolation and support existing leaders of color.

“You need to have everyone’s voice at the table, so you can fully understand the needs each community has.”

“I’m not sure what can be done that would immediately bring minorities into more leadership roles, but bringing more awareness and education to local youth, helping to inspire the next generation of leaders, would be a good first step,” Allen said.

“It has to start at the school level,” Dymally said, echoing the sentiment and pointing to TreePeople’s outreach efforts.

The organization’s environmental education programs encourage elementary and secondary school students and teachers in the Los Angeles area to “dig in,” learn the benefits of growing the urban forest, and become lifelong caretakers of the environment.

“In 10, 15, 20 years, we’ll see some of those young people cycle through (the organization and the movement),” Dymally said.

Dymally says the lack of diversity may be explained, in part, because there simply aren’t a lot of people of color in the environmental arena to begin with.

“It might just reflect the numbers involved,” he said.

It has been said that when young minorities see professionals “who look like them” in a particular field, the more likely they are to want to be that “when they grow up.” Seeing African American doctors can inspire African American children to think about medical school. Having prominent Latino lawyers in the community can motivate Latino youth to attend law school or pursue other legal professions. Exposure and access are key, Dymally shared.

Dymally says many people of color, African-Americans in particular, may not view the environmental arena as an attractive or lucrative career choice.

The environmental field is a “calling” for many, he says, and as such, it’s just as important that the people of color taking on leadership roles be “people of passion,” who will help bring resources to more people and drive California’s urban forest movement into the future.

Genoa Barrow is a freelance journalist based in Sacramento. Locally, her byline has appeared in the Sacramento Observer, The Scout, and Parent’s Monthly magazine.