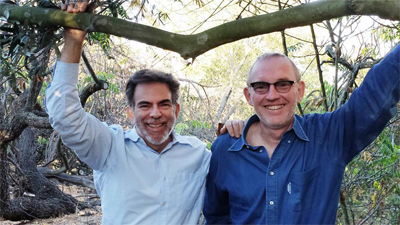 NOVEMBER 10, 2014 – LOS ANGELES –
TreePeople is pleased to announce that Andy Vought has joined the organization as CEO and will work alongside President and Founder Andy Lipkis as we roll out our emergency campaign to insure that Los Angeles builds the nature based green infrastructure we need to face a hotter, drier future.

It was also announced that Kim Freed has joined as Chief Development Officer.

Andy Vought comes to TreePeople after a remarkable thirty-year career leading semiconductor and tech-related start-up companies in Silicon Valley, France, Israel, Germany and elsewhere. He will lead TreePeople’s initiative to mobilize citizens and agencies in a united effort to create a climate-resilient Los Angeles with at least 25% equitable tree canopy and 50% clean, local water supply. To achieve this TreePeople will expand its already successful programs and pioneering strategies in Citizen Forestry, collaborative governance, and green infrastructure and expand the reach, depth and involvement of our traditional support base.

Vought’s experience leading Silicon Valley tech start-ups has been as CFO, CEO, Director and investor. Semiconductor start-ups he led pioneered broadband technologies including DSL and optical networking. Vought also serves on the Board of Directors of the Save the Redwoods League and as President and Director of the Portola and Castle Rock Foundation. He earned a BA in Environmental Studies and BS in Economics from the University of Pennsylvania, and an MBA from Harvard Business School. Vought has relocated to Los Angeles from Palo Alto.

“We are delighted to have Andy Vought join our staff,” says Lipkis. “He has the depth of experience and capabilities to ensure we meet our urgent and extraordinarily ambitious mission of moving Los Angeles to climate resilience.

”TreePeople is a highly regarded environmental non-profit throughout the state, in fact the country, “says Vought. “With Kim and me joining the senior management team, I look forward to advancing TreePeople’s aim of urban sustainability.”

Board Chairman, Ira Ziering, added, “TreePeople has been exceptionally lucky. We have been blessed with our founder Andy Lipkis, a charismatic and truly visionary leader, and we have been held on task by the energy and dedication of Tom Hansen. As we recognize the need to expand our efforts and scale up our capacity I am thrilled that we have been able to hold on to both while adding the new energy and talents of Andy Vought and Kim Freed. They are great additions to our team. Our mission has never been more urgently needed and our plans have never been more ambitious. I am very excited about our opportunity to take an even more significant role in the shaping of our city Los Angeles”

As the Los Angeles region faces historic drought and a hotter, drier future, TreePeople is uniting the power of trees, people, and nature-based solutions to grow a more climate-resilient city. The organization inspires, engages and supports Angelenos to take personal responsibility for the urban environment, facilitates collaboration among government agencies, and promotes leadership by grassroots volunteers, students and communities. In this way, TreePeople seeks to build a powerful and diverse coalition of people who together are growing a greener, shadier, healthier and more water-secure Los Angeles.