A recently completed study of San Jose’s urban forest revealed that San Jose is second only to Los Angeles in impervious cover. After mapping San Jose’s trees from the air using lasers, researchers discovered that 58 percent of the city is covered with buildings, asphalt or concrete. And 15.4 percent is covered with trees. 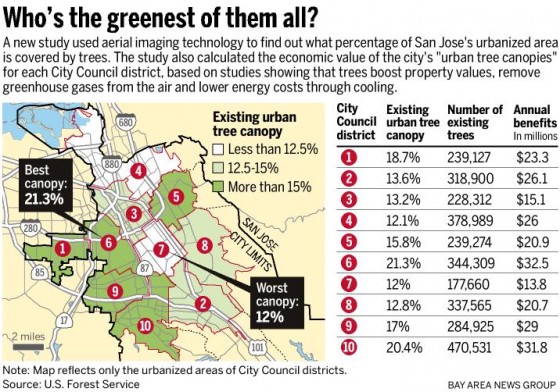 Despite the significant difference in canopy vs. concrete cover, San Jose’s urban forest still manages to boost the city’s economic value by $239 million annually. That’s $5.7 billion over the next 100 years.

Mayor Chuck Reed’s Green Vision plan, meant to plant 100,000 more trees in the city will increase canopy cover by less than one percent. There are 124,000 available spots for street trees and another 1.9 million spots for trees on private property.

Our City Forest, a San Jose-are nonprofit, has coordinated the planting of 65,000 trees in the area. Rhonda Berry, the CEO of Our City Forest, says that with the majority of planting sites in the city on private property, there is an extraordinary opportunity to boost the city’s tree cover.