Life just happens. “It was never my grand plan to become an advocate for the Santa Monica Mountains, but one thing led to another,” said Jo Kitz, co-director of Mountains Restoration Trust (MRT). Her childhood hikes near Mt. Hood put her at ease in the mountains. As an adult, she met children who were afraid of bugs and wild things and realized that joy in nature wasn’t a given. Serving as a guide for the California Native Plant Society and the Sierra Club, she thrived as an outdoor educator for city-dwellers, “They thanked me as if they had been to the most marvelous party ever!”

Under a valley oak in Malibu Creek State Park in the Santa Monica Mountains, Kitz had her aha! moment as she observed a surrounding landscape devoid of these majestic trees. “Valley oaks were once the most important and plentiful native trees in the southern coastal ranges to Los Angeles County. They were decimated by early settlers who harvested them for farmland, fuel and lumber.” A shooting location for the TV series “M.A.S.H.,” the park had only a handful remaining. She took her conviction straight to the park superintendent. Soon she was planting trees at pre-approved locations. It seemed simple enough in the beginning. 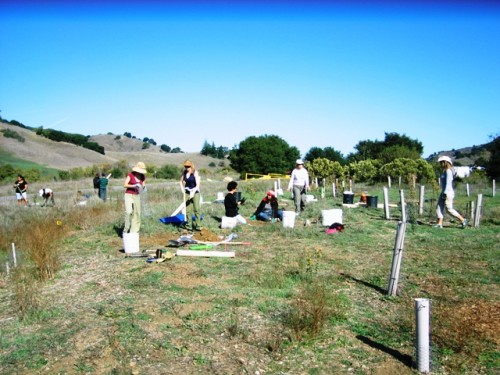 Volunteers assemble tree tubes and wire cages to protect young seedlings from gophers and other browsers.

Suzanne Goode, senior environmental scientist for the Angeles District of State Parks, described Kitz as “a fierce woman who never gives up, she keeps on caring and keeps on doing.” Only one tree survived from her first group of potted trees. Now that Kitz plants acorns, she loses very few, “When planting 5-gallon trees I soon learned that when you take trees out of a pot, the roots have to be cut or they remain restricted.” But there is nothing to stop the roots of acorns from seeking water. Of the 13 ecosystem circles planted in February, with five to eight trees per circle, only two trees failed to thrive. “They need very little irrigation once they are growing naturally. Over-watering is the worst thing you can do,” explained Kitz, “the roots come to the surface, and if they dry out without their feet in the water table, they die.”

In some years she has planted and then watered very little for five months. During the recent drought, however, more water has been needed to get the seedlings through the dry season. Native bunch grass provides groundcover. Squirrels and deer chomp on the grass if there is little else available, but if the grass takes root in the wet season it will survive these setbacks.

MRT’s campground oaks improve the view from Goode’s park office window. “Oaks grow faster than people realize,” she said. At 25 feet, a young tree is tall enough to serve as a perch for hawks. For twenty years, Goode has approved the MRT planting sites, clearing them first with park archeologists so that Native American artifacts remain undisturbed.

Goode has mixed feelings about the required tree shields, which are fitted with nets to keep birds and lizards from getting trapped inside. “Protecting trees from the wind doesn’t allow them to develop the sturdy plant tissues they need to survive, so they have to be shielded for several years.” She acknowledged that campground trees need the shields to protect young trees from the occasional overzealous weed-whacker. “Myself, I prefer to plant an acorn and let it fend for itself,” said Goode, who has planted plenty during her career.

The weed-whacker is an indispensable tool for nurturing young trees. “When we started we didn’t think we needed a pre-emergent. We were so wrong, the weeds flourished!” said Kitz, who encourages native perennials as substitute for herbicides. Natives such as creeping rye, poverty weed and equestrian ragweed maintain a green carpet around the trees even during dry summers when the rest of the landscape is golden. She weed-whacks around the perennials in the fall to reseed the next year’s growth. By cutting back the dried brush, the owls and coyotes can eliminate the troublesome gophers that can easily destroy them. Every acorn is enclosed in a gopher-proof wire cage.

The bucket brigade provides acorns and the surrounding vegetation with a strong start.

Creating a Sense of Place Through Partnership

“You can’t imagine how many mistakes can be made while digging a hole and sticking an acorn in,” said Kitz, who couldn’t replant Malibu Creek State Park without lots of help. Her first partners were at-risk youth from Outward Bound Los Angeles. The youth tree-planting teams were active for five years, but when funding ended Kitz sought out a new partner that could carry on independently. This made time for her other pursuits, the acquisition of land to expand and connect Santa Monica Mountain trails and habitats.

Cody Chappel, Mountain Restoration Coordinator for TreePeople, another Los Angeles-based urban forestry nonprofit organization, is her current on-the-ground expert in acorn quality control. He secures a tree’s future with a few enthusiastic volunteers who can only spare three hours to learn about the care and nurturing of an acorn. Chappel collects the adapted acorns from the park and soaks them in a bucket. Sinkers get planted, floaters do not, since air indicates insect damage. He talks of the mountains as “the lungs of LA, the source of the airshed.”

Chappel hosts MRT planting events at regular intervals, tapping into thousands of members and a celebrity-studded board of directors who pull in funding from mega-donors Disney and Boeing.

Kitz’s favorite spot in the park these days is an east-facing slope, where a young oak grove will one day inspire stories of “place” and imagination. Chumash tribes once gathered acorns here to make mush in the park’s grinding holes. The stories of the grinding holes don’t make sense without the oaks. Kitz imagined bringing them back, and by doing so found her place in the Santa Monica Mountains.

Suanne Klahorst is a freelance journalist based in Sacramento, California.
English Spanish